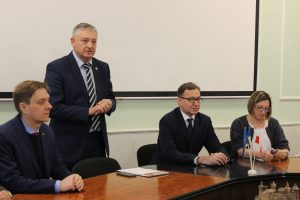 On November 22, 2018, in the conference hall of the university, a meeting was held with representatives of the Institute of National Remembrance of the Republic of Poland – Director Yaroslav Sharek, director of the archive Mazheniy Kruk, deputy archives director Mariusz Kwasniak and Mariusz Zhulwnick, staff member of the international relations section Dorot Lewski, exhibition coordinator Pavel Zelonius , as well as the director of the Bureau of National Education Adam Khlebovich. 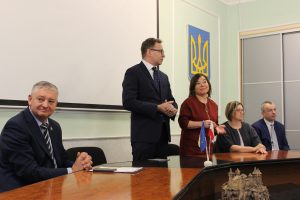 The purpose of this delegation’s stay in Chmelnytskyi region is to launch a thematic exhibition “Anti-Polish Operation of the NKVD in Soviet Ukraine 1937-38”, which will function within the framework of cooperation between the Institute of National Remembrance of the Republic of Poland and the State Archives of Chmelnytskyi, Odessa and Vinnitsa regions. 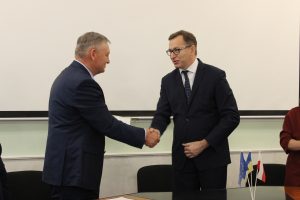 With the greeting words rector Sergiy Kopylov open the meeting, he emphasized that during the preliminary meeting with the deputies of the Director of the archive of the Institute of National Remembrance of the Republic of Poland, in the spring of 2018, he reached an agreement on cooperation, namely, the digitization of documents, covering one of the history periods of our university. 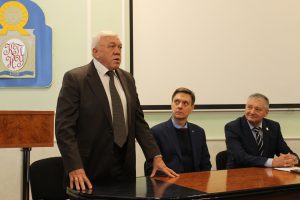 “… during this meeting, we raised several questions concerning the period of stay in Poland of the first rector of Kamianets-Podilskyi State Ukrainian University Ivan Ohiienko and the storage of his works in the fund storage. Then the leaders of the Institute of National Remembrance of the Republic of Poland promised to facilitate the discovery of such documents … The fact is that in July 1924 the Polish Council of Ministers gave consent to the opening of the Department of Orthodox ideology at the University of Warsaw, whose professor was Ivan Ohiienko, “said Sergiy Kopylov.

Yaroslav Sharek, Director of the Institute of National Remembrance of the Republic of Poland, gave his next speech, in particular, he expressed his sincere condolences to the Ukrainian people about the events of 1932-33, the time when millions of innocent people were victims of a totalitarian system. 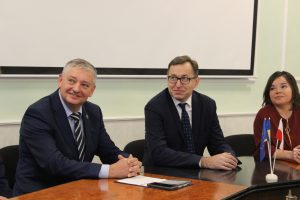 The director emphasized the importance of the Institute’s collaboration with the scientific and archival institutions of Ukraine and handed over to the university’s rector a disk with digitized documents of the period of Ivan Ohiienko’s stay in Poland.

Also, the director of the State Archives of Chmelnytskyi region, a graduate of the historic faculty of our university, Volodymyr Baydich, addressed to the audience, emphasizing the necessity of cooperation between the archives and the Institute in order to transfer documents related to the history of Podillya to the fund storage of the State Archives of Chmelnytskyi and are in the archives of the Institute. 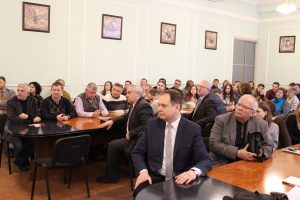