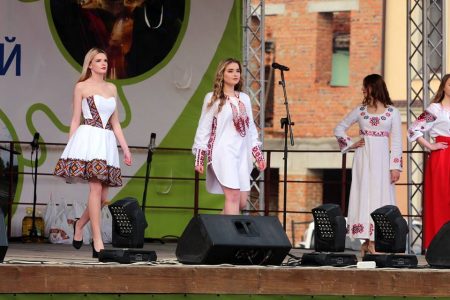 On April, 20th in Kamianets-Podilskyi the tourist season was open, the centre piece of which was Podilskyi necklace. The action began with the performance of the anthem of the Ukrainian Warriors (Sichivych Striltsiv). The song was performed by about two hundred bandurists who participated in the 2nd All-Ukrainian Festival-Bandura Art Competition. 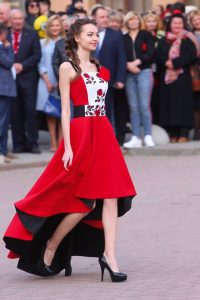 Subsequently, folkloric flash mob Podilskyi necklace began. About five hundred girls took part in the action, which became the record of Ukraine. Among the participants of the flash mob were students of our university, in particular, students of natural, pedagogical and physics and mathematics faculties.

A peculiar highlight of the festival was the presentation by students of our university the collection of  Vyshyvanka’s of famous Bozhena Filatova.

It is pleasant that in the official part of the opening of the tourist season the dance group “Gorlitsa” was led by the honored worker of culture of Ukraine, the leading specialist of the department of educational work and humanitarian education – Volodymyr Sedin.

In the framework of the holiday students of the Faculty of Pedagogy, who repeatedly competed prize-winning places at competitions and festivals of different levels, were also rewarded. This time they won the competition for the best pysanka.