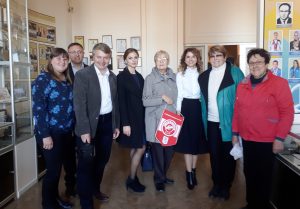 “History is trying to get into dreams of the descendants …” especially when you live the century of our university. You learn exciting facts, events, and figures that became legends. Moreover, you get a chance to communicate with them, to see the university with their eyes, throwing away a few decades ago. 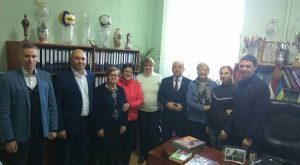 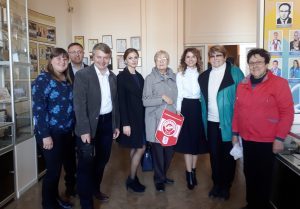 I would like to talk about this incredible meeting in details. On October 22, handball players came to the Dean’s Office of Physical Education, where they presented memorable gifts: handball textbooks, t-shirts, souvenirs, the book of the Olympic Games, a T-shirt with a portrait of the historical figure of the Ukrainian handball Ihor Turchyn, a graduate of our university and coach of the legendary “Spartak”. The unique gift was Turchyn’s sports suit, which athletes left at the University’s Museum.

The crowded festive hall of the house of culture gave applause Zinaida Turchynova, Liudmyla Bobrus-Poradnyk, Halyna Zakharova and Mariia Litoshenko. All the noisy applause only confirmed the achievements of the former athletes, and the guests were pleasantly impressed by such warm reception and universal recognition.

Nowadays, these women are idols of childhood, an example of sport dignity and strength for a lot of people. They give all their impressive vitality, charisma and sense of humor. Their will, wisdom and perseverance in work have become the foundation for those incredible results, which are still hard to believe.

Everyone who had the opportunity to communicate with outstanding athletes received a lot of pleasant impressions and feelings. 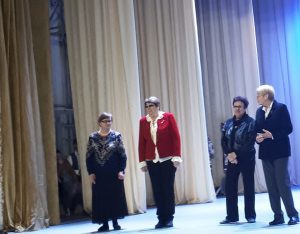 Kamianets-Podilskiy Ivan Ohiienko National University is proud of its graduates.

The staff of the Faculty of Physical Education, the teachers of the Department of Sports and Sports Games expresses their enthusiasm for athletes-handball players for their tremendous contribution to the Ukrainian handball and for agreeing to share the joy of celebration of the 100th anniversary with all of us.

Mariia Bila, teacher of the Department of Sports and Sports Games